2022: RATTLER ASKS FOR SUPPORT AND AWARENESS SURROUNDING THE CORRUPTION OF B.I.A. AND COURTS ORDERING THE FORCED DISPLACEMENT OF THE WINNEMUCCA INDIAN COLONY: www.waterprotectorlegal.org/post/wic-evictions

2022: RATTLER ASKS FOR POLITICAL PRISONER ERIC KING AND HIS FAMILY TO GET DIRECT SUPPORT FOR ERIC'S ONGOING INCARCERATION AND POLITICAL TARGETING, AS WELL AS SUPPORT FOR HIS EVENTUAL RELEASE HOME. ERIC SUPPORT SITE LINKED HERE

Rattler was granted release from federal surveillance November 2, 2022. This is the first time since 2016 Rattler has not endured direct surveillance from law enforcement. Please keep updated for further advocacy and future projects as he transitions to be with family.

BREASTPLATE RAFFLE: Rattler had a raffle December 5, 2022 for breastplates and chokers he made in prison for the charges he received due to his work in the NoDAPL camps. All proceeds from the raffle will go towards transitioning from federal surveillance on probation to community land projects.

Rattler's statement regarding his bead art December 2019: "A nation in distress [upside down flag] ignored by the nation that they [veterans] served...The blue on the center shell is for the Water we are fighting to protect. Red is for the blood that was shed overseas for a government that ignores us [veterans], and for the [Water Protectors'] blood shed by police working for the oil company." There's one bell for each branch of the military.

Oglala Lakota tribal member Michael Markus (Rattler) was charged alongside 5 other indigenous Water Protectors who aided others in the resistance camps engaging in nonviolent direct action to stop the desecration and construction of the Dakota Access Pipeline (DAPL) near the Standing Rock reservation in the years 2016-2017. 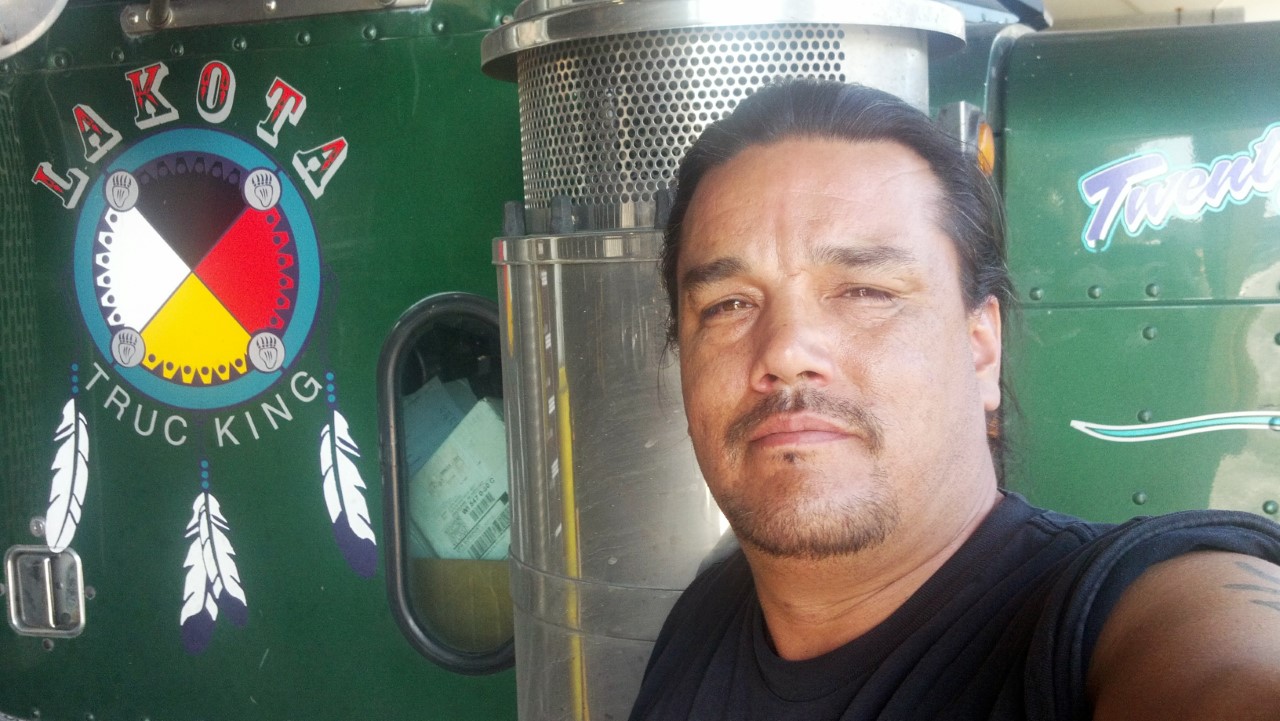 He spent months in jail in ND before struggling to find safer housing on pretrial release in 2017. He was incarcerated at FCI Sandstone (federal prison) September 2018, serving a three year sentence from a non-cooperating plea for Civil Disorder, a charge that has mainly been given to those engaging in resistance movements (American Indian Movement, Black Liberation Movement, Anti-Vietnam War protestors, NoDAPL Water Protectors, etc.) RATTLER CONTRACTED COVID ALONG WITH OTHER INMATES DECEMBER 2020 DURING HIS INCARCERATION AT SANDSTONE FEDERAL PRISON. COMPASSIONATE RELEASE TO HIS FAMILY DUE TO COVID AND PRE-EXISTING CONDITIONS WAS FILED BUT DENIED BY THE SAME FEDERAL JUDGE WHO SENTENCED ALL THE FEDERAL NoDAPL CASES, JUDGE DANIEL HOVLAND. PROSECUTOR GARY DeLORME ALSO ARGUED TO KEEP RATTLER LOCKED UP DURING THE PANDEMIC.

Rattler served as Akicita, a continuation of a traditional role among the Lakota that protect the peace and hold their own people accountable of their responsibilities for the collective. He gave necessary knowledge of militarized police tactics, scouting of DAPL, aided de-escalation during nonviolent direct actions, and helped those within camp to be safe and sober.

He's a Marine veteran. His Lakota name is Mato Tanka (Big Bear). He pledged five years ago to dance the sacred Sundance and carry a sacred pipe (Canupa) for all life that coexist together. His own statement can be read below:

"Being a Sundancer, my understanding is you're giving of yourself to the People; you sacrifice yourself for the welfare of the People. [Being Akicita in camp] was the best sacrifice I've had so far.

I hope I honor my ancestors by doing this, and carrying on this tradition [of Akicita].

When I get out, quite honestly if the fight isn't over, I'm gonna jump right back in it because it's the right thing to do and it's where I belong. So when I get out, I've got your back...The best thing I can say to you is even with these federal charges, I'm not afraid to go back out there because you gotta look in yourself and think what is it going to do not for just you but for future generations...What are you going to leave them? Are you going to leave them a legacy that they'll be proud of? What kind of world do you want your grandchildren to live in?

Oceti is gone but Standing Rock is still here with all the federal co-defendants. I'd like to say again thank you to everybody who helped us out and for your continued support you give us; be it letters, five bucks, whatever, we appreciate everything you all are doing. Again thank you, and I love you all.

I don't want credit for anything...you know, I'm just a flea like everybody else, and us fleas gotta stick together to make the big dog ITCH."

September 27, 2018, the day he was sentenced to three years imprisonment: "They may lock me up, but thousands will take my place."

PLEASE SEE RATTLER'S WEBSITE AND FACEBOOK PAGE FOR UPDATES ON HIS FAMILY'S AND LEGAL TEAM'S RESPONSE REGARDING COVID-19 WITHIN PRISON.