CURRENT UPDATE: PLEASE SEE THE "WRITE LETTERS" AND "DONATE" TABS TO SUPPORT REDFAWN WHILE UNDER FEDERAL SURVEILLANCE ON PROBATION

Growing up in Colorado and Pine Ridge, South Dakota, Red Fawn was raised in traditional Lakota ways, grounded with love...

... and a deep connection to the earth and all things sacred. Her mother, Troy Lynn Yellow Wood, taught her the importance of fighting for social and environmental justice, and standing up for her people.

Red Fawn is a loving daughter, auntie, niece and friend. While at Standing Rock, she served as a trained medic, continually rescuing and caring for her fellow Water Protectors. She also earned the deep love and respect of the Indigenous youth in the camps, who looked up to her as an example and mentor. 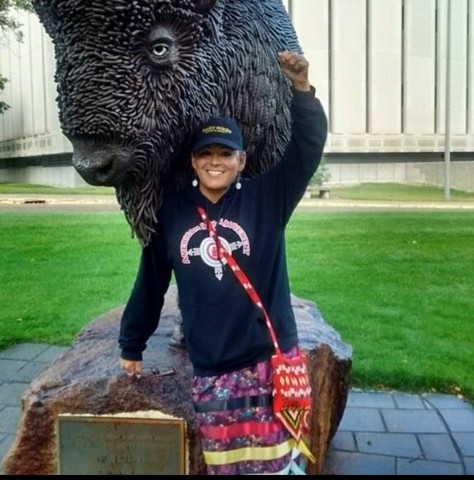 When the Dakota Access Pipeline (DAPL), owned by Energy Transfer Partners (ETP), occupied 1851 Fort Laramie treaty territory of the Oceti Sakowin (Seven Sacred Council Fires of the Great Sioux Nation) in order to put a crude oil pipeline under the Mni Sose (Missouri River), Red Fawn was quick to respond. She joined other Lakota people who were gathering together to assert their treaty rights and protect the source of precious drinking water for themselves and for 16 million people downstream. Standing with her for the rights of Indigenous people and our Mother Earth at Standing Rock were many thousands of people from around the world, including representatives of over 300 sovereign Indigenous nations.

Red Fawn was one of over 140 Water Protectors arrested at Standing Rock on Oct 27, 2016, while peacefully exercising their first amendment right to oppose construction of the Dakota Access Pipeline (DAPL) on treaty-protected land. But she was one of only a handful of people who received serious federal charges.

Bystander and drone videos of her arrest show a Pennington County Sheriff’s Deputy, Thadius Schmit, singling her out from among a crowd of protesters, tackling her from behind, and taking her down to the ground, followed by at least eight other heavily armed law enforcement officials piling on top of her. Shots erupted from the melee, and Red Fawn was arrested and charged by North Dakota with attempted murder of police officers. Those charges were later dropped and replaced with federal charges, including civil disorder, discharge of a weapon in relation to a felony crime of violence, and possession of a firearm and ammunition by a convicted felon. In the arrest affidavit, Schmit said he arrested Red Fawn for “being an instigator and acting disorderly” and in a hearing described this behavior as shouting “water is life and you’re killing Mother Earth and stuff of that nature.”

As reported by the publications the Intercept and the High Plains Reader, leaked documents have revealed that Red Fawn had been targeted for surveillance and possible arrest by a sprawling intelligence operation that included ETP, TigerSwan and other private mercenary firms hired by them, the FBI, and various levels of law enforcement--all conspiring to discredit and derail the growing resistance to the pipeline.

Leaked documents also revealed that the gun Red Fawn was accused of firing belonged to Heath Harmon, an FBI informant who had infiltrated her camp and managed to become her romantic partner--and who had been with her throughout the day she was arrested.

A recent Intercept article helps explain the factors which convinced Red Fawn to take the plea. Based on several pretrial motions denied by the judge who would have tried the case, Red Fawn and her attorneys became convinced her case would not be fairly presented at trial. Among these rulings: they could not argue that the law enforcement operation on Standing Rock land was illegal based on treaty rights. The government did not have to turn over information about Harmon or other covert operatives involved in the case. Nor did they have to address the legality of law enforcement’s close collaboration with TigerSwan, a private security firm hired to protect the pipeline.

RedFawn's poem from lock up:

"My name is Red Fawn
I am a prisoner of war
My enemies have hunted me 500 years
You know their names
They are the Kings, the Queens
They are all the things that are slaves to greed and power